No items found.
Product is not available in this quantity.
Cart
(
0
)

No items found.
Product is not available in this quantity.
Book a Demo 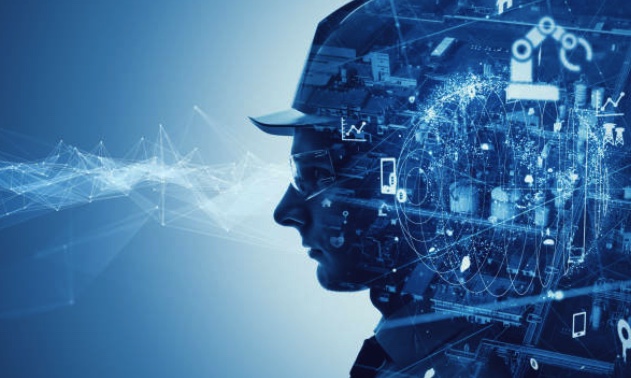 News Round-Up: The Launch of an AI-Powered Estimating Software, Togal.AI

News Round-up: The Launch of An AI-powered Estimating Software,Togal.ai

Welcome to Togal.ai’s news roundup. In this recurring segment, which will be published from time to time, we will highlight important news and developments about Togal.ai, your deep-learning construction software. Now, you can stay updated on what’s new in the world of  AI-powered construction technology.

On August 19, 2021, they released a feature focusing on the former congressman, Patrick Murphy, bringing AI to the construction industry. The new start-up is called Togal.ai, and it can “reduce the estimating process from days to seconds through automation.”

When Patrick Murphy joined Coastal Construction Group in 2017, the report says he “was struck by how low-tech the construction industry was”.

Murphy served in the U.S. House of Representatives for Florida’s 18th congressional district. He led future-of-work initiatives during his career.

Thus, after serving two terms, the 2021 report says he “applied the same mindset to Coastal Construction when he rejoined the firm as executive vice president.”

According to the feature, Murphy wanted to use technology to cut costs and improve efficiency. He focused on an area which he believes needs an update: the estimating process. As stated by Murphy, it’s the biggest piece of overhead for most construction companies. With automation,  the estimating process can be reduced from days to seconds, thus reducing overhead.

The August report says this led to the creation of the AI estimating software, Togal.ai. Hence, with seed funding from Coastal Construction, he founded the startup in 2019.

Utilizing machine learning and artificial intelligence, the report says Togal can automate construction estimates. This is a process that involves measuring the size of a project’s square footage to price the cost of construction accurately.

But as Murphy mentions, it can take about 2 days to measure each room for estimation. With Togal, the process goes down to 10 seconds.

The report also highlights that this new software is “among a wave of new property technology startups disrupting the construction and real estate industries.”

Tribe AI on Partnership With Togal

Patrick Murphy, CEO of Togal, has firsthand experience on the challenges of the construction industry. He knew machine learning was a crucial tool in overcoming those challenges. So he needed a skilled talent to bring their vision to life.

Partnering up with Tribe

They faced many challenges in finding the right partner. Skills like machine learning were very limited. Skilled people in the area were already working at Amazon or Google. The technical agencies that they’ve met weren’t making the progress they suggested they were.

That’s when Togal was introduced to Noah and theTribe. Tribe AI is a company that focuses on end-to-end AI solutions. They consist of engineers, researchers and scientists from industry leaders in machine learning and AI. These industry leaders are Google, OpenAI, Amazon, Airbnb, Uber, SpaceX and Tesla.

According to Togal President Patrick Hughes, “Tribe really took the time to work with us and understand the process and what it would take for us to penetrate it.”

Meanwhile, Tribe co-founder Noah Gale says, “If you want to have real impact, you have to think beyond technical talent.” He adds the importance of understanding how to build teams of experts and leverage their skills in a way that results in something ”powerful and industry-changing.”

Building Deep Learning AI Models From the Ground up

Togal and the Tribe team believed that it’s not enough to solve their user’s pain point. So, they focused on creating something “incredibly simple and streamlined” to reach market adoption.

Hughes says, “We knew what it needed to be: upload your plans, hit these three buttons, and here’s your report.” Hence, Tribe centered on developing the platform in this manner.

They assembled a team of engineers who specialize in machine learning, design product management and frontend/backend expertise. Nathan, the product manager on the project says “On one end there are machine learning APIs that Google or Microsoft have developed for computer vision, but then there’s what Togal is doing – building a machine learning model from the ground up. It’s a very, very challenging project.”

So the team had to do the following:

The project does not limit to machine learning. It also consists of UX, data management, software engineering, research and ops work. To execute the project successfully, a machine learning first approach and strategic leadership is needed. That’s when they decided to scale the team by bringing a CTO for the project.

Construction news sites and organizations feature Artificial Intelligence construction technology, Togal.ai. The news sites highlight the technology’s launch into the marketplace to help estimators increase their win rate by finishing takeoffs in seconds instead of weeks.

Here are some of their highlights.

On revolutionizing the estimating process

In the features,Togal CEO, Patrick Murphy says “We are compressing weeks of work into seconds, and nobody has focused on this space yet.” The reports highlight that this is what every construction company needs.

The Real Deal, a provider of news for real estate professionals, said in an October 8, 2021 report, “Togal.ai’s launch comes at a pivotal time for the construction industry.” They highlight how this technology can help companies experiencing labor shortages due to the pandemic.

Togal’s Construction AI Engine: How does it work?

To explain the problems Togal.ai solves, the reports describe the process of cost estimation.

An estimator measures the size of each room’s square footage. If he performs this manually, he needs to do it with rollers and rollers. If he does this digitally, he performs it with a click and drag of a computer mouse.

However, it can take weeks and hundreds of pages to complete a major project. The reports highlight that “Togal can finish those jobs in mere seconds.”

The Construction Executive Magazine, a magazine for the business of construction, wrote a feature on Togal on September 17, 2021. They focus on how “Togal’s construction AI engine uses AIA measurement standards to automatically and accurately detect, label and measure project spaces and objects”.

Patrick Hughes, co-founder of Togal says "Togal is faster than an experienced estimator, more accurate and a fraction of the cost. I haven't talked with a construction company that wouldn't use this. It makes them all more efficient."

Togal.AI continues to streamline the preconstruction process for many construction leaders. Recently, this AI estimating software announced a new partnership with Beck Technology. Togal.AI also won first place at an international startup competition and made it in the “top 50” in BuiltWorld’s Construction Tech List for the second year in a row.

The Engineering and Construction sector is a $10 trillion industry. However, according to a McKinsey Global Institute study, it has grown only 1% in labor productivity for the past 20 years.

Murphy, CEO of Togal, quickly took notice of the lack of machine learning and technology. With the help of various PhDs in mathematics and artificial intelligence experts, they looked for ways to improve the production with technology. Their conclusion points at the estimating department being repetitive and time consuming.

Now, the company has released an AI-driven product that can “shorten the estimating process from weeks to seconds.”

Reports say the goal of Togal.AI isn’t to replace humans. Instead, it allows estimators to “spend more time helping their clients save money and build better jobs, thus increasing their win rate.” To learn more about how Togal.AI can integrate with your workflow, request a demo. 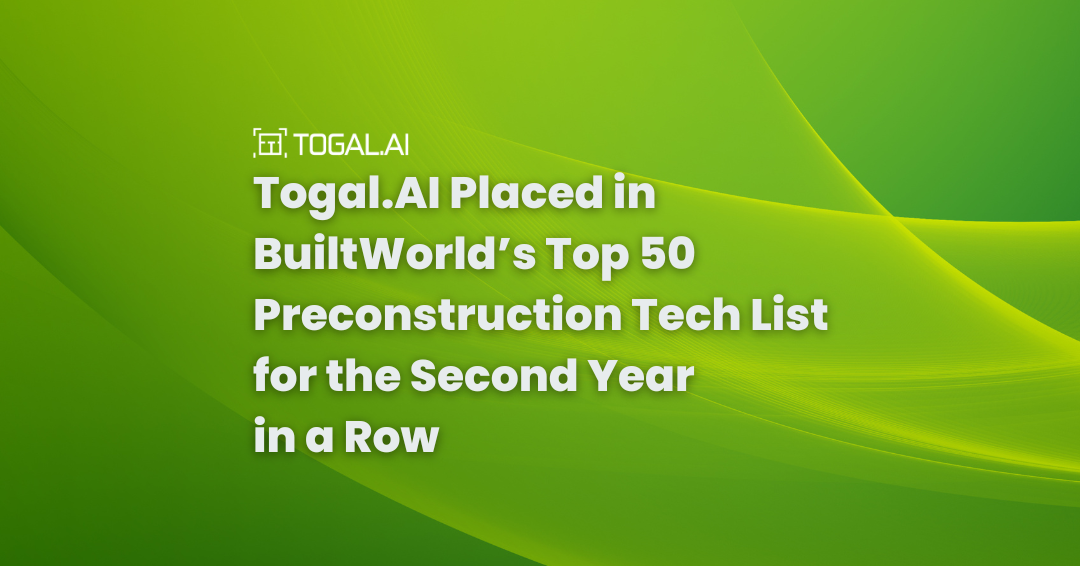 Togal.AI Placed in BuiltWorld’s Top 50 Preconstruction Tech List for the Second Year in a Row

How Togal.AI placed in BuiltWorld’s top 50 Preconstruction Tech List for the second year in a row. 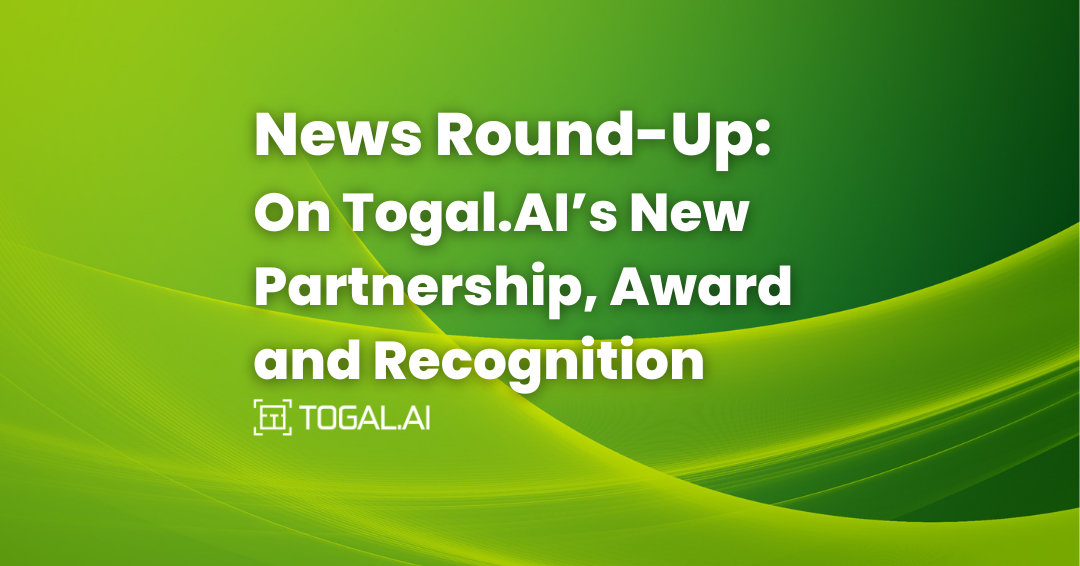 Highlighting the latest news and important developments on the deep-learning construction program, Togal.AI. 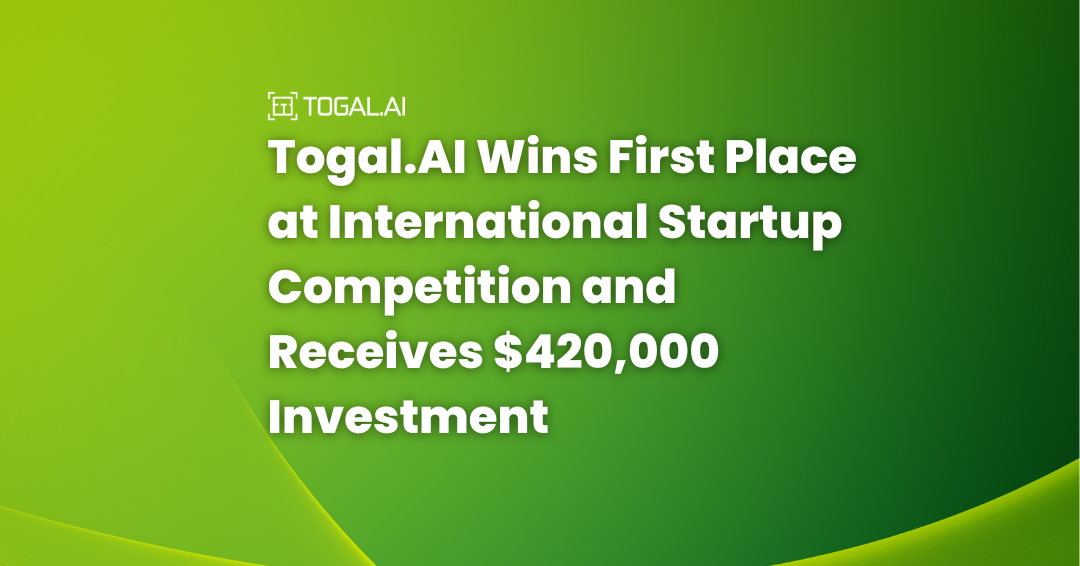 Togal.AI is incredibly honored to be the winner of the eMerge Americas Startup Showcase.

Book a Demo of Togal.AI